Software and products that I recommend you use.

This outlines some software and devices I recommend you use: uBlock Origin, Sponsorblock, Aegis Authenticator, ThruNite T1 flashlights, Logitech G Pro Wireless mice, and ThinkPad Laptops. Nothing here was sponsored.

uBlock Origin is an open source ad blocker and something I install immediately on all my devices. Running an ad blocker makes browsing the web way better. It removes distracting ads (even from YouTube), invasive tracking, and makes you safer by removing potentially fake links. It's the best piece of software I use even though it mostly remains unseen. And it even works on your phone.

You can install it on Firefox Desktop, Firefox Android, and Chrome Desktop. Make sure you install the correct "Origin" version and avoid "ublock.org".

SponsorBlock automatically skips over sponsored segments in YouTube videos. Not YouTube ads (that's what uBlock Origin is for), but the actual parts of the video sponsored by companies to advertise their products. It uses a crowd-sourced database of timestamps to seamlessly jump over those parts. It also allows you to skip to the highlight of some videos by pressing "enter" so you aren't wasting time watching exposition.

You can install it on Firefox Desktop and Chrome Desktop.

Aegis is a two-factor authenticator (2fa) app for Android that's free and open source. The killer feature and why I recommend it is that it supports automatic encrypted backups of the database in JSON format. You can unlock the app with a password or optional fingerprint. It supported true OLED dark mode. An alternative app is andOTP but there were problems with the backups' encryption back when I switched to Aegis.

Enabling 2fa on your accounts is essential for security, especially preventing credential stuffing attacks. Backing up your 2fa data is important in case you lose your phone. It saves you having to dig out recovery codes or try and convince someone that you own the account.

You can install it on Android via the Play Store or F-Droid.

This is a tiny rechargeable flashlight that can output 1500 lumens, enough to hurt your eyes if you look directly into it. It has a magnet on the back to stick to things and an optional pocket-hat clip. I liked it so much I've bought three of them and gave one to a friend who then bought himself a couple more. 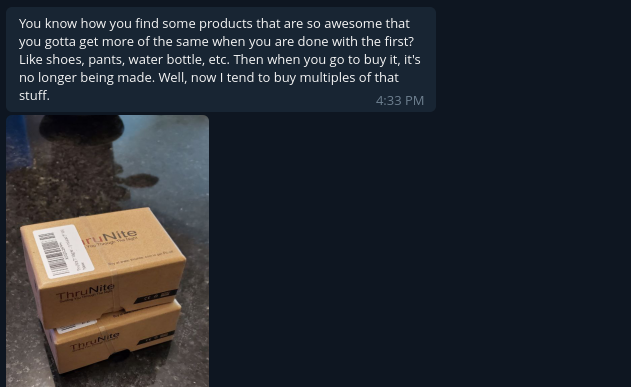 I've used a lot of wireless mice, and this one is by far my favourite. It has a USB dongle which I prefer because Bluetooh pairing annoys me. If you disable the LEDs the battery lasts for a few weeks of solid usage.

I like it so much that I own five of them: one for my office desk, nook desk, laptop bag, home theatre, and surveillance cameras NVR. I leave the last one plugged in so that when a mouse battery dies, I can swap it with a fully charged mouse that's ready to go. It also ensures they wear at a somewhat even rate.

I've had several different laptops over the years and have settled on buying ThinkPads going forward. I hate Lenovo as company because of their Superfish scandal, but I can't deny that ThinkPads are absolutely solid. I currently own a ThinkPad X1 Carbon 6th Gen.

A lot of Linux developers use ThinkPads which means Linux is well supported on them and the drivers just work. The laptops are easy to pop open and service. Many parts are user-replaceable. My laptop charges off a small USB-C phone charger that I carry around. In a state of sickness-induced exhaustion, I spilled an entire glass of Gatorade on it and then drenched it in water to try and flush it away. I took the back off, drained it, and then pointed a fan at it for 24 hours. The laptop was working fine the next day.